Once upon a time, when I regularly used my XBox 360, I bought some Microsoft points, with which I bought some of the excellent Live Arcade games that were available, and left me some spare for later.

Then, for various reasons, I ended up leaving said 360 at my parents’ house untouched for years. Seemingly, at some point in that time, the points system was done away with and replaced by a wallet set-up.

I’m not sure what else is changing with it, but this wallet contains money that expires(!), but at least the XBox people had the courtesy to send me an email warning me to use the 20-ish pounds before the end of May.

Not being one to pass up value, I managed to get the console running, connected to the internet and updated on the last day possible. And so I came to semi-impulsively purchase Syberia, alongside some indie titles and Ecco the Dolphin. (I’ll beat that game one day!)

I’d not heard of Syberia or it’s sequel previously, which was fairly unusual. Having looked through every available arcade/indie title, this stood out to me due to the interesting art direction, and the fact that it was a port of a PC point and click game.

Since I’m not personally traversing Europe right now, I figured this game would be a good substitute for this week. I decided to not do any further research beyond determining that it received ‘generally favourable’ reviews at the time of release, because I like to give my media the chance to surprise me.

What I found exceeded my expectations. Set in a… mostly realistic yet still fantasy version of Europe, you take the protagonist Kate on a hunt to fulfil her lawyerly duties and sort out some inheritance contracts. That doesn’t sound terribly exciting, but the mundane real-world grounding of a modern woman from New York venturing into slightly surrealist situations really worked for me.

I’d visit this village for a day, no problem.

The puzzles were decent. Not really that challenging for the most part, but they all basically made sense within the rules of the universe, which I appreciate. I also very much appreciate dodging the trap of ‘cryptic bullshit’ that certain games along the vein of Myst would fall into.

The story is quite engaging. No spoilers, (I say about a game that is 12-13 years old) but I will say that it all felt like a pleasant journey. I was half expecting things to be more grim and gritty than they were (you spend a lot of time among rusting buildings and contraptions you see) but I was pleased to find that it didn’t really feel the need to follow too many of the tired tropes of escalating stakes and danger. It was more about discovery, and people changing their outlook on life. 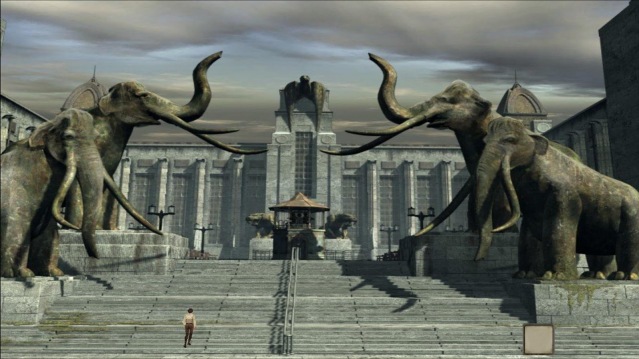 And mammoths. Definitely about mammoths.

Aesthetically speaking, I thought the game really held up considering how old it was. Mostly due to how excellent the pre-rendered backgrounds are. The environments felt like they could easily be lived in, while still feeling appropriately grand or unusual, depending on where you are at the time. Musically, I thought the soundtrack was also very appropriate for the mood of the game, and not overused either. Many areas have no music, only sounds of water or birds or mechanics and so on. Honestly, one of the highest compliments I can pay it would be that certain areas were reminiscent of Rupture Farms from Abe’s Oddysee, because I think the atmosphere of that game was first rate. 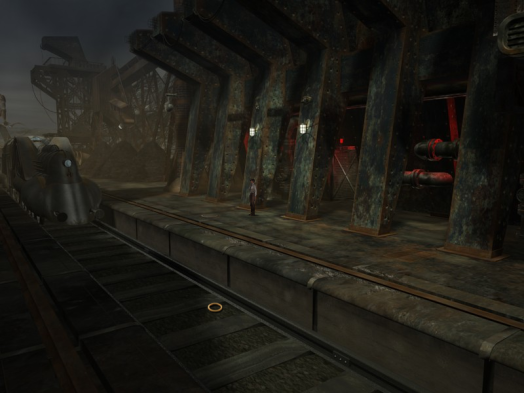 A lot less grim than there though, what with the lack of slaughter and slavery.

So, I’d recommend it, you got that. But I suppose I wanted to write about it because I’m still thinking about it after the end. It’s not that the end was particularly special, just that the overall experience felt different from other games I’ve played. It managed to be melancholy also uplifting. I was able to be just absorbed into the world because there were no time limits or unnecessary threats of death. Kate Walker seemed like she could be a real human from the universe in which I exist, and the more fantastical elements seemed charming.

It’s a product from a certain era, and games don’t really get made like this now. Sure, there are story games, and adventure games, but this game felt different. I think it’s a ‘the secret ingredient is love’ kind of deal. The game had a specific author, who had their own vision for how the script should be. Maybe that’s why it feels more personal than usual.

The game isn’t perfect or anything though. Time for nit-picking!

The most egregious problem is that somehow Kate manages to have difficulty traversing the environments without getting stuck on things, or sometimes nothing at all. The only time when I was truly stuck came from not being able to find a certain room, simply due to the game not letting me run to a very particular spot on an empty area of screen before sending you to the next area, and I had tried repeatedly, before determining that there mustn’t be anything over that way. (perhaps this is not a problem on PC)

So that’s a bit immersion-breaking, but I put up with it. I have a small quibble with the story (side story really) where Kate has several phone conversations with people back home in New York. The timescale is a little bit unclear, which leads to the other characters seeming a bit odd, escalating their comments disproportionately to the amount of time we perceive Kate to have been away. It’s like if your boss sent you from London to Edinburgh to attend a meeting, and they started calling you up demanding results when you’re just passing York.

Oh, and as much as I love pre-rendered backgrounds, they needed some kind of illusion to make the water look like it’s moving at least a little bit. The static water looks ridiculous (though you can’t tell that from a screenshot). 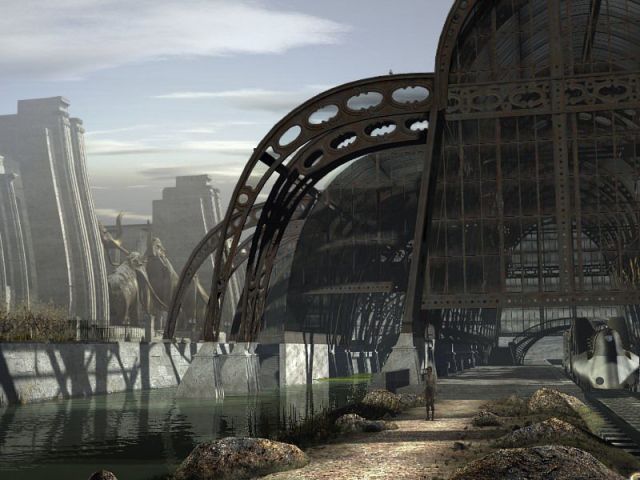 See? Nice. Until it moves, or doesn’t as the case may be.

I wasn’t expecting to find a game I’d find especially memorable when trying to maximise the amount of games I could buy with expiring credit, but I did. Now I’m looking forward to playing the follow up, and google tells me a third game was announced for release this year. Huzzah!