I don’t talk about politics on the internet often. It’s too depressing, honestly. This is partly because every so often, I find a glimmer of hope. Hope that is usually left impotent, as I can’t help but notice the usual pattern of things looking up for a little bit, before it all tumbles back down.

And partly because no matter what you say about literally anyone, internet people instantly assemble into their with-us-or-against-us hard stances and reasonable discussions are hard to come by. So I’m just mostly talking about the system as a whole, but if you happen to think I’m specifically talking about some party or specific politician, well, I can’t control that.

Occasionally I see something positive in politics – that despite my cynicism – breaches my defences and makes me optimistic in something. Maybe it’s optimism that the general public seem to be rallying around someone not blatantly crooked. Maybe some dreadful piece of legislation is being changed after public backlash. Maybe one of those petitions you see going around reaches the lofty target and thousands upon thousands of people have added their name to the list. (which, it is alleged, means Parliament needs to consider it)

But then what do we see?

The general public voting for obvious villains. Oh yes, for all we blame the media and politicians, the wonderful public as a whole deserves a lot of blame for never bothering to look beyond the most divisive headlines.

As an aside: it’s silly to me that anyone caught being corrupt should ever get another job in politics. Standards should be higher, not lower, compared to normal jobs. If you were caught stealing chocolate in the storerooms 3 times, Thorntons probably wouldn’t give you a job there again.

Legislation being ‘changed’ to something even worse, while plastic-grin wielding people assure the people that it is all much better now. (and we assume THIS time they mean it, and let it drop)

I don’t even need to provide examples. There’s a decent chance that for each of the above things I mentioned, a specific example popped into your head. We’re used to it.

I like to hope that things can improve. That moral people can take charge, and make changes for the better. I vote for people that might fit this bill, even if deep down I don’t ACTUALLY think my vote will matter. I’ve still gotta vote, just in case I’m wrong. That counts as hope, right? It’s like seeing the gravestone of someone, but being open to the idea it was a case of mistaken identity.

The problem is, I can see how difficult it is to remove the amoral and greedy from the system. One of the worst things to happen to our current system was politicians realising at some point that you can do basically anything, and given enough time, people will forget about it as long as you just refuse to acknowledge it. The news cycles move too fast. No one has time to spend 14 months trying to get someone sacked for shenanigans.

Politician caught selling off public assets to his mate?

Outrage! Sack him! Petition! But… what happens when said politician just sits there with a shit eating grin refusing to comment on it? Is… is someone going to arrest him? No. Lift him out of parliament, and lock the door? No. Is he going to resign or get fired? Not unless he specifically pissed off the current leader. Nothing happens. Who’s going to get rid of the guy? You?

I’m not saying I’d prefer Umbridge in power, but at least you could get rid of her with centaurs.

We all expect the system to be corrupt. We shrug our shoulders and cross our fingers that they don’t cause too much damage and maaaaaybe we can get rid of them in 5 years time. We might get briefly angry about it, but mostly, we just sigh and accept it. What’s that? You’re launching an enquiry? Oh that’s good. I better get back to Facebook then. I’m sure this enquiry into yourself run by yourself will be fair, impartial, and actually have consequences. Facebook may well inform me about more bad things happening than the papers would tell me, but I’m also spending my time indoors on the internet like a recluse. No one’s scared by what I think.

And even if, by some chance, someone literally comes away with hard proof of wrong doing, good luck getting that message out to the vast majority of the populace, who’s going to get the message to them? The Sun? The Daily Mail? The Mirror? (the 3 newspapers with the highest circulation in the UK) Nah, better make sure everyone knows which celebrities are pregnant and which specific group are stealing money from you today. (as long as it’s not someone they like) 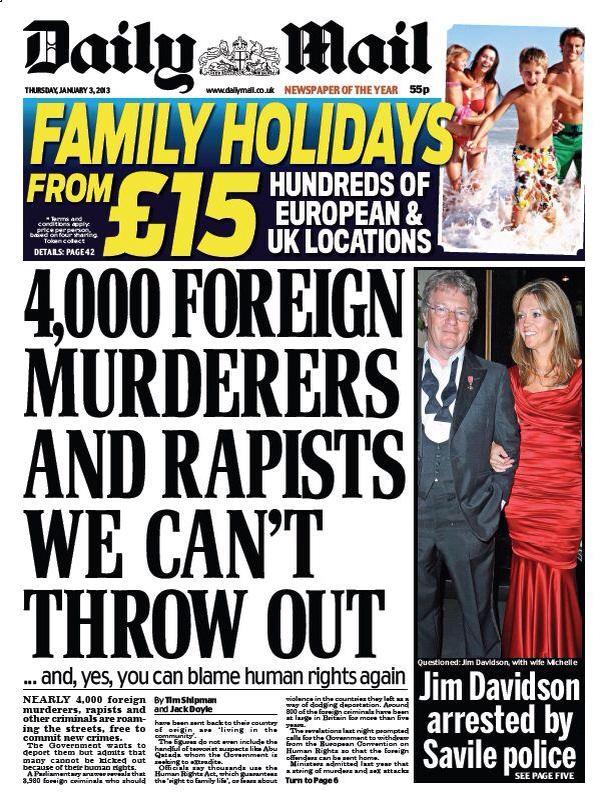 Oh, the foreigners are to blame again? I’m sure this headline was 100% fair and not misleading.

Ah well. What can you do eh? Flee the country? There’s a thought actually…

There are so many problems with every form of governance, and I sure as hell ain’t about to solve anything. I just wanted to express some minor frustration that I don’t think anything will change. I just hope that somehow we manage to save the NHS before it’s too late.

At least I don’t have to vote in America. That’s a real moral quandary if/when Bernie doesn’t get nominated.